The Redmi K40, Redmi K40 Pro and Redmi K40 Pro + flagship phones have been launched by the company today in its domestic market in China. Leaks were coming out about these phones that came inside the 40 Series of Redmi for quite some time, which have come to a complete halt today. The phones introduced inside this series have been brought to the market as an upgraded version of the Redmi K30 and K30 Pro smartphones. 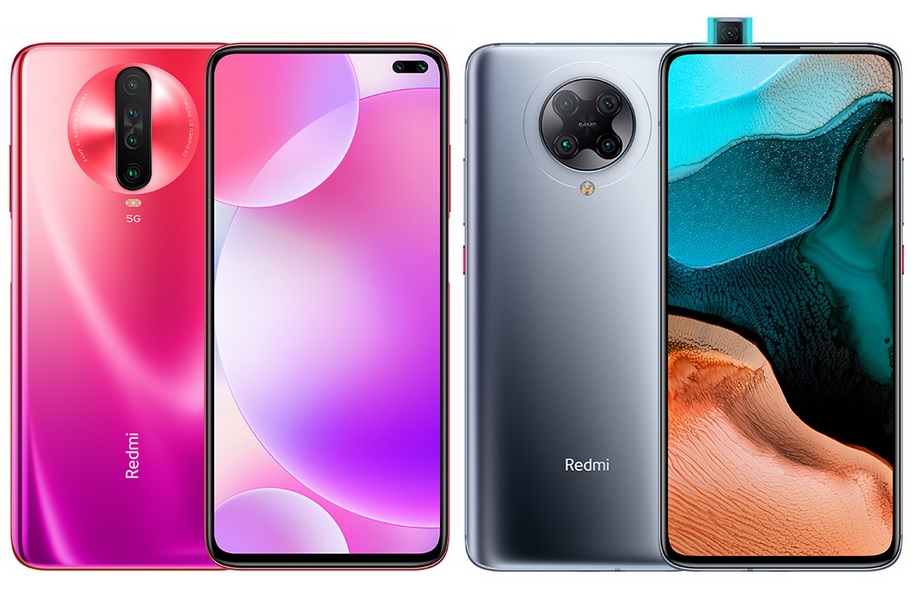 If we talk about the specifications of Redmi K40 Pro and Redmi K40 Pro +, then it has a 6.67-inch E4 AMOLED display with a resolution of 1440 x 3200 pixels. Apart from this, the E4 display given in the phone has been manufactured by Samsung. Also the phone is full HD + Supports HDR 10+ with resolution and 120Hz refresh rate. Its maximum brightness is 1,300 nits. Both phones have been given the flagship Qualcomm Snapdragon 888 SoC by the company, which has Adreno 660 GPU for graphics.

The phone has up to 12 GB of RAM and 512 GB of storage. Apart from this, both phones have Android 11-based MIUI 12.5 custom skin. If you talk about battery, then 4,520mAh battery has been provided for power backup in phones, which supports 33W Fasta charging. Apart from this, connectivity options in the smartphone include 5G, 4G LTE, Wi-Fi 6E, Bluetooth 5.2, GPS / A-GPS, NFC, Infrared (IR) and USB Type-C port.

Finally, let’s talk about the powerful camera given in the phone, both of these phones have triple rear camera setup. But, the sensors vary. The triple rear camera system present in the Redmi K40 Pro has a 64-megapixel primary camera, 8-megapixel wide-angle lens, and a 5-megapixel macro lens. Redmi K40 Pro +, on the other hand, has a primary camera 108MP Samsung HM2 sensor and the rest of the sensors are similar to the Redmi K40. At the same time, both phones have a 32 megapixel sensor for selfie and video calling.

We got this information through an offline retail store. According to the information given, the price of these phones has been officially cut. It is not a limited period offer. That is, this deduction has been made permanently, hence the new price will be valid from today. This Samsung phone is known for its excellent camera quality and excellent battery backup. 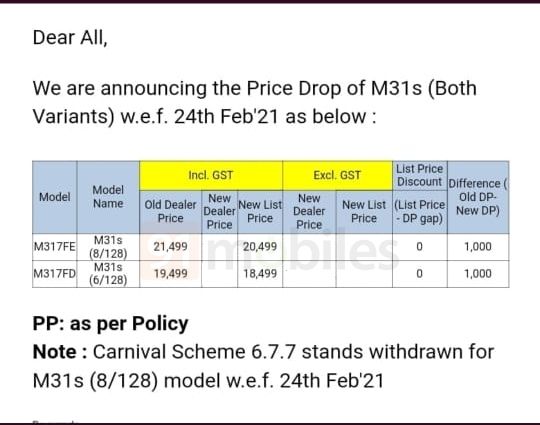 The Samsung Galaxy M31S is available in two colors including Mirage Blue and Mirage Black. The phone has a 6.5-inch fullHD + 1080 X 2340 pixel resolution screen with an aspect ratio of 20: 9 and supports 405 pixels density. The company has used Super AMOLED punch hole display. The phone’s screen is Corning Gorilla Glass coated. Fingerprint scanner is provided in its side panel.

Samsung Galaxy M31S has been introduced by the company on the Exynos 9611 chipset and it has been given an octa-core processor of 2.3 GHZ. Vibration has introduced it in 6 GB and 8 GB memory and both models have 128 GB memory.

This phone had been in the news a lot due to its camera capability and let me tell that it has a 64 MP quad camera setup. The company has used Sony’s IMX682 sensor. Its second lens is of 12 MP which supports wide angle. The third and fourth sensors have been given 5 MP which are for macro and portrait mode. The phone has a 32 MP front camera for selfie which supports wide angle mode with 4K video.

For power backup, the Samsung Galaxy M31S has a 6,000 mAh battery and it comes with 25 Watt fast charging support. This dual sim based phone has 3 slots. Where a slot is for a microSD card. The phone has dual 4G support.

Preparation for Samsung Galaxy A52

Recently, the price of many of its phones has been cut by Samsung. At the same time, the company is now preparing to launch its new phones Galaxy A52 and Galaxy A72. According to the information we have received, by mid-March, vibration can present both these models. Although 4G model is expected to come at the moment, but the company can definitely surprise a bit about 5G.

The wait for the Realme Narzo 30 series is finally over today. The company has launched two smartphones Narzo 30A and Narzo 30 Pro 5G within this series. Not only this, in addition to smartphones in today’s event, Realme Buds Air 2 TWS and has also launched its first Motion Activated Night Light. At the same time, if we talk about new phones, then it has been brought as an upgraded version of the company’s Narzo 20 series. Of the two phones offered, the Narzo 30 Pro 5G is the more powerful. In this article, we will give you all the information ranging from the price of Narzo 30 Pro 5G to the features.

First of all, if you talk about the look of Realme Narzo 30 Pro 5G phone, then the hole-punch display has been given on the top left on the front. This punch-hole has a front camera which will be useful when taking selfies and video calling. All three sides of the phone are equipped with bezels due to hole-punch. At the same time, a little chin part will appear on the bottom. Side-facing fingerprint scanner in smartphone Has been given. Apart from this, there is a triple camera setup in the rectangular shape in the rear of the phone. At the same time, the bottom of the phone has 3.5mm jack, Type-C charging port and speaker grill. In terms of look, it is similar to the old phone of Reality.

The most special feature of this smartphone is 5G connectivity. The company has given MediaTek Dimension 800 U 5G chipset in it. The MediaTek Chipset comes with the MediaTek 5G Ultrasave Technology. This Chipset has the ability to achieve download speeds of up to 2.3 Gbps. Not only this, it has been made using 7 nm process. It has an octacore CPU with dual clusters, with two arm Cortex-A76 processors with 2.4 GHz of block speed. 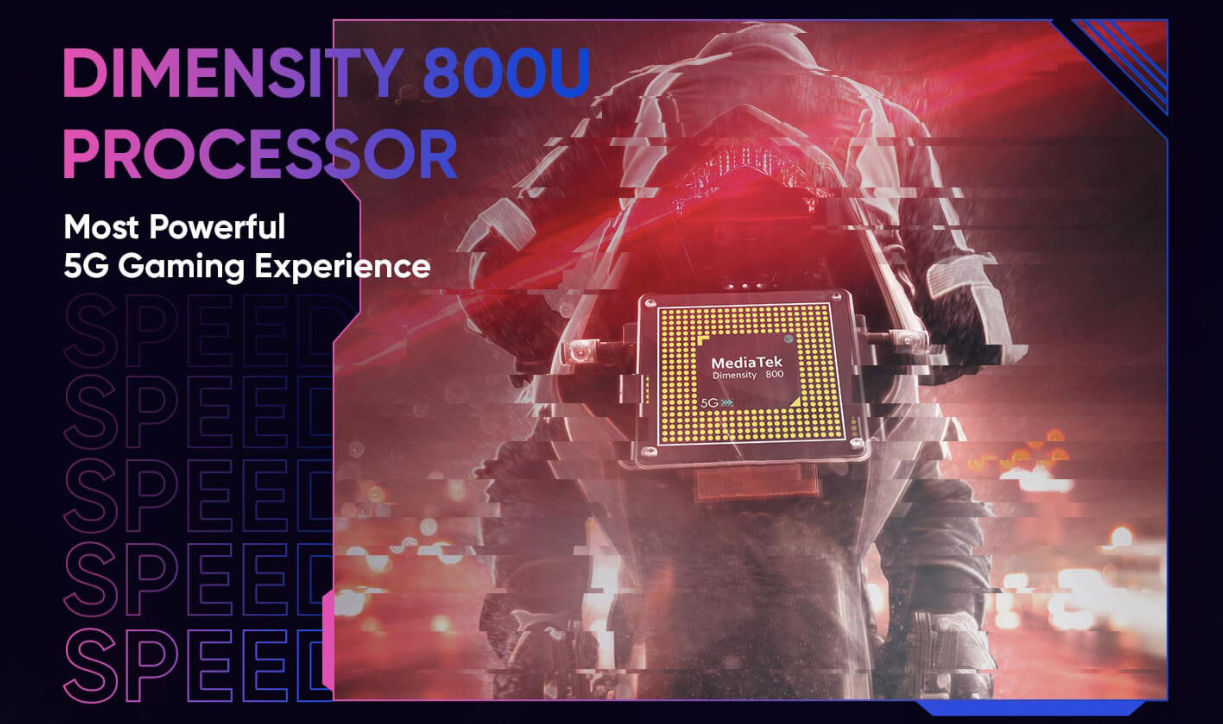 The Narzo 30 Pro 5G has a triple camera setup at the rear and a single punch-hole selfie camera at the front. If you talk about the camera setup on the rear, then it has a 48-megapixel main 6P lens with f / 1.8 aperture. Apart from this, there is an 8 megapixel ultra-wide angle lens with f / 2.3 aperture and a 2 megapixel macro sensor with f / 2.4 aperture. At the same time, the phone has a 16-megapixel front camera with f / 2.1 aperture for video calling and selfie.

For power backup, this new 5G phone of Realme has a 5000mAh battery that comes with 30W data charge technology. The company claims that the 5000mAh battery can be charged up to 100% in 65 minutes with the newly updated 30W Dart Charge and in just 25mins it can charge the phone around 50%. 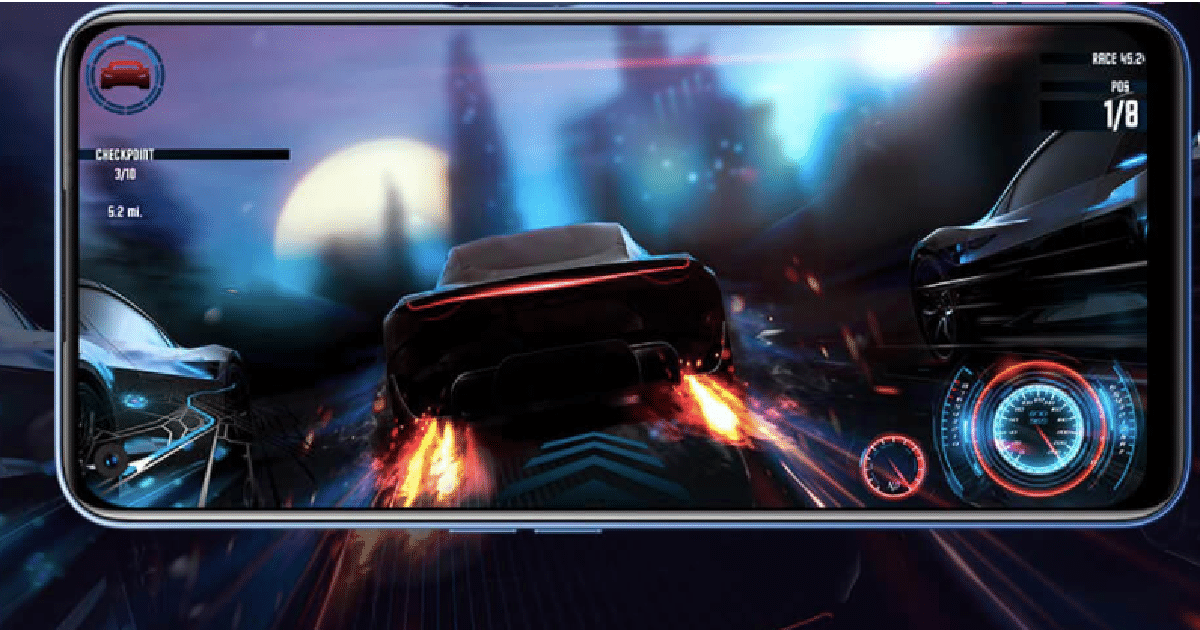 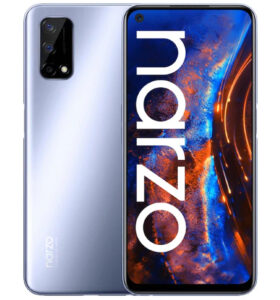 Realme Narzo 30A is a budget phone, in this way the company has introduced it with polycarbonate construction. However the quality is good and you will also like the textured stream design in the past. At the same time it can be said that it does not slip from the hands and there are no fingerprints in it. The company has introduced it with Laser Black and Laser Blue colors. The rear panel of the phone has a square style camera and fingerprint scanner under it.

Talking about the display, the phone has a large 6.5-Inch screen and the company used LCD panel with 720 x 1600 pixels resolution. The screen to body ratio of the phone is 88.7 percent, while it supports 269 PPI. Its peak brightness level is 570 nits.

Realme Narzo 30A has been introduced on the MediaTek Helio G85 chipset. It is a gaming processor and with this the company has started gaming phones in a budget below 10 thousand rupees. The phone has an octa core processor with 12nm fabrication and it supports 2.0GHz clock speed. At the same time, the company has introduced it in 3 GB RAM and 32 GB memory in addition to 4 GB RAM and 64 GB memory. The phone has a dedicated memory card support.

When you look at the camera regarding the display and processor, let me say that it has been introduced with a dual camera. The main camera of the phone is 13 MP in which F / 2.2 aperture is used. At the same time, PDAF support will also be available. Along with this, the second sensor is black and white. The phone also has HDR support in addition to portrait mode. Speaking of selfie, the company has given an 8 MP selfie camera in it. This camera supports AI.

Dual 4G based phones can use two 4G SIMs. Apart from this, WiFi and Bluetooth have also been provided.

Vivo has made its smartphone Vivo V20 SE cheaper by giving gifts to Indian customers. The company has informed that Vivo V20 SE can now be purchased with a deduction of Rs 1,000. Not only this, a cashback of Rs 2,000 will also be available on HDFC Bank card with the phone. Talking about the features, Vivo V20 SE has a 32 megapixel selfie camera with support for Super Night mode. This phone was introduced by the company inside the Vivo V20 series in November last year. Let’s further inform you about the new price of the phone. 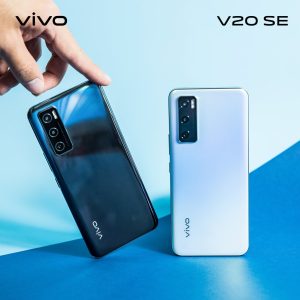 The 8GB + 128GB model of Vivo V20 SE was introduced by the company for Rs 20,990. But, now after deducting Rs 1,000, this phone is being sold for Rs 19,990. Actually, the information about the price cut of the phone has been shared by Vivo CEO Jerome Chen himself through his Facebook. The phone comes in two color options, including Aquamarine Green and Gravity Black. Also read: Vivo S9 with dual selfie and world’s first MediaTek Dimensity 1100 SoC will enter on March 3, know everything before launch.

Talking about the features and specifications of Vivo V20 SE, this phone comes with a 20: 9 aspect ratio, whose screen-to-body ratio is 90.12 percent. This phone has a 6.44-inch FullHD + AMOLED display with 1080 x 2400 pixel resolution, which works at a 60 Hz refresh rate. To protect the screen, it is protected with Corning Gorilla Glass 3.

The Vivo V20 SE works with Android 11 on Android 10. Similarly, for processing, this phone is equipped with an Octacore Qualcomm Snapdragon 665 chipset, which works on 11 nanometer fabrication. The phone has 8 GB RAM and 128 GB internal storage. Also read: Samsung Galaxy A12 vs Vivo Y20A: Know who will get the upper hand in the battle of budget category?

Apart from this, Vivo V20 SE is a dual sim phone that supports 4G VoLTE. Basic connectivity features have been provided in the phone along with 3.5mm jack. At the same time, the phone has a 4,100 mAh battery equipped with 33 watt flashcharge technology.