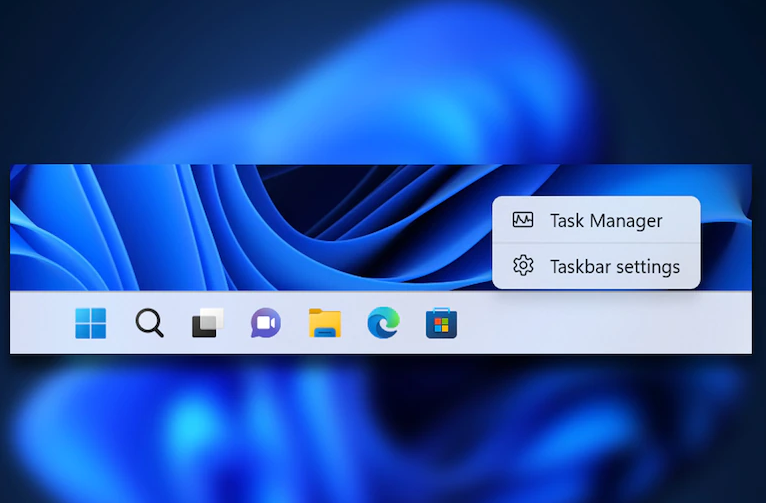 Microsoft has pulled itself together and is bringing the task manager back to the taskbar’s context menu. This feeds the hope for further functions.

When Microsoft released Windows 11 about a year ago, in addition to a new look and new features, there was also a lot of frustration about the missing functions. The taskbar, which can no longer be moved and was initially unable to use drag-and-drop, was particularly affected. While this deficiency has already been fixed with the recently released 22H2 update, Microsoft is currently testing the return of a sorely missed context menu entry.

Open task manager from the Taskbar

The headline sounds logical – and it worked the same way up until Windows 10: If you right-clicked on the taskbar, you would find an entry for starting the task manager in the context menu that appeared, along with many other options. For many Windows users, this manipulation to open the process management should have been ingrained over the years. And so they were amazed when Windows 11 only displayed the self-referential “Taskbar settings” option in the puny context menu of the taskbar.

With the Windows 11 test version Build 25211, at least the task manager has returned to the taskbar context menu. As Microsoft admits in the Insider Blog, the decision to take this step was based on (probably considerable) user feedback. This should not have been easy for the company from Redmond in the US state of Washington, since the taskbar is a central element of the new Windows 11 design. The request “Let us know what you think” made in the article mentioned should therefore be taken seriously. If the ratings in the Feedback Hub app are positive, other context menu entries such as the desktop display, toolbar and button management may return.

With the latest test version, Microsoft has also optimized the previously unpopular widgets by separating the widget picker (“Add widgets”) from the settings. Settings will still open from the profile picture, but will now include options for how the widget bar behaves. You can set there whether they already appear when you point the mouse at the widget icon and whether the icon is allowed to display notifications and announcements. The widget selection previously displayed in the settings will now appear after clicking on the plus symbol. In addition, Windows 11 from Build 25211 prevents the uninstalling of apps with dependencies. As an example, Microsoft mentions Steam, which is required to start linked games.

The innovations are so far only available in the developer channel of the Windows Insider program. “Normal” Windows users may therefore have to wait for the next function update 23H2 until it is available to you. However, Microsoft has made it clear several times that the functions shown in the Dev channel cannot initially be assigned to a specific Windows version. Since the group is now also distributing innovations outside of the annual function updates, it could also happen very quickly.